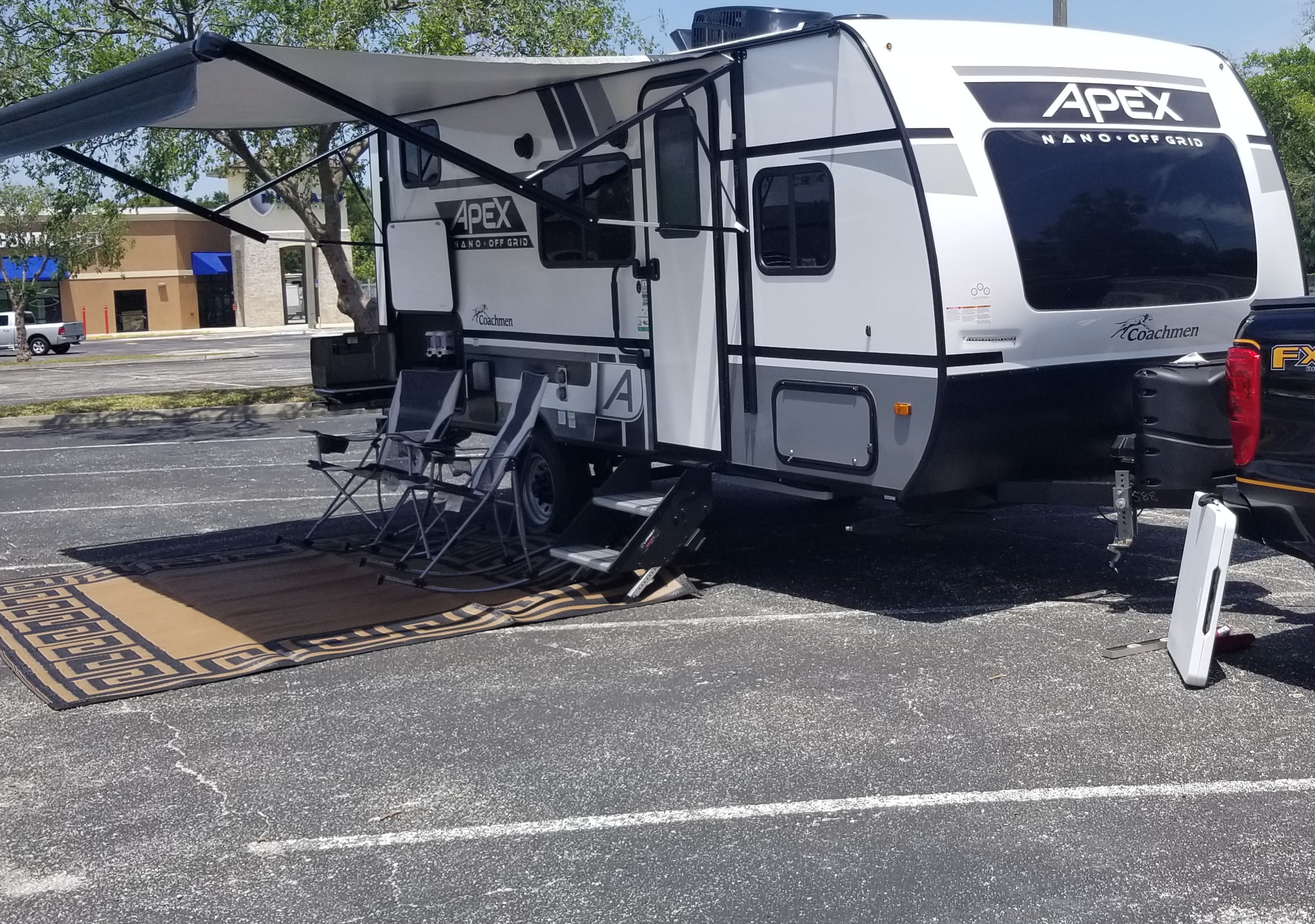 We love the camp life.My husband did not grow up camping like myself. My husband now wants to retire and camp full time. We want everyone to be able to experience camping if not continually in their life, at least once. You cant fully explain the experience, it dosnt do it justice, it is something you have to experience to understand the greatness that comes with it.

We had an awesome first experience and totally recommend Melissa and Matthew. The camper was perfect and ready to go. The communication was the best with all of our questions answered quickly. We opted for delivery and everything was setup and ready to go. Thank you so much for this great experience.

My husband and I where 1st time camping ever, we had family in tents and some in rv, but all I can say is ours was the best our host had everything like a 5star hotel beautiful clean some many extra. They are so thoughtful, amazing host.

The owners were very sweet when we first contacted them. The RV is very well equipped. They were very helpful when we first spoke to them. However, we were charged almost $23 extra for supposible late fee. We had other people with us that also rented from outdoorsy and they were over 3 hours late and none were charged a late fee but just us for being an hour late. ( we came from almost 4 hours away, there was a lot of traffic) also, they’re saying they found burned holes on the outside rug. They’re charged us almost $55 for this. We didn’t see any pics to prove there were holes on the rug. We tried so hard to leave everything as clean and good as they left it to us. Although we still paid for a cleaning fee. So it seems very unfair and unreasonable that they charged us so much for these claims. It is interesting that when they picked up the RV, they inspected it while I was there, and they never mentioned anything about that outside rug having burned holes on it. If I would’ve know that were going to charge me for it I would’ve kept it because it looks almost new. Now they’re saying they have to buy a new one. The air conditioner did turn off on us a few times and we had to turn the whole RV on and off just to have everything start up again. And although we experienced this and we’re charged the late fee, I was still going to give them a great review. But now with this charge we are very disappointed with what they did. I will not recommend them.

Hi Sir, it is not my intention to make you unhappy. I struggled putting it in there as I really didn&#39;t want to have to do that. My husband was cleaning it as he always does and he pointed out all the holes that were not there. We cannot use that for others as it does not look good anymore. Again, I do not try to just put things on there. I did not charge for the screen on the door that was pulled out because we were able to fix that. I try to fix everything I can before collecting and Ginnie Springs at the gate makes you put a hold on your card and they only give you 1 hour to complete the setup or they charge the card $20 so I had to add a late charge for your late arrival as we were charged. This is the first time I have had to do that and again not my intention to make you unhappy. You and your family are very pleasant and I still would have rented to you again.
Thank you, Melissa

This was our first camping experience and Melissa made it so easy...from communicating before our trip, to all the special details she included in the camper (the basket of fruit was delicious!), it was a wonderful experience. I will recommend Melissa's camper to friends and definitely reserve it again. Thank you so much!

I have never dealt with anyone nicer or more accommodating. I would highly recommend renting from Melissa as I am sure I will in the future. Timely response and very useful add ons at great rates.

Awesome rental with great owners. Can’t wait until next time!

We will definitely be renting again! Ha ha we literally just had to show up and enjoy our time.
Melissa is a great communicator. She has everything perfectly set up and ready to go for you and your husband also will help set up and he did amazing by walking us through what we need to know being we’ve never can’t and I camper before it’s really helped.
This is a beautiful camper and we were blessed to be able to experience just a quick weekend trip in it.

Melissa and Matthew are great folks, they went above and beyond to make sure my son and I had a blast. The RV was great and helped us create some great memories.